How smart am I?

What is my IQ?

I once participated in an IQ test and scored 120 points.

As a data scientist I wonder: What is my real IQ? Because this is only one test.

According to Wikipedia, the accuracy of the IQ test is about 3 points. So my real IQ will be somewhere between 117 and 123 points. Again, I only did one test with a score of 120 points. What is my real IQ?

The secret of Bayesian Statistics is that additional background information gives a better determination of my IQ! 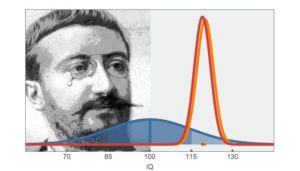 68% of the population has an IQ between 85 and 115 points and only 2% is highly gifted with an IQ above 130 points. The average IQ of the entire population is 100 points. This is the blue, Normal Distribution in the figure.

The blue curve is the Prior Probability. This is our background information.

My IQ score of 120 points gives the Likelihood Function. This orange curve is centered at 120, with a width of 3 points. This is the data.

Bayes’ Theorem combines the Prior and Likelihood to the Posterior Distribution. The Posterior gives the answer: the red curve has it’s maximum at 119 points.

The most probable value for my IQ is therefore 119 points. This Bayesian has thus obtained a lower IQ!

Why is this a better estimate of my IQ? Because the maximum of the red curve is higher than that of the orange curve. This is explained in the Bayes in Action course.

The portrait in the figure is from French psychologist Alfred Binet (1857-1911) who invented the first practical IQ test.