An application of Simulated Annealing

My wife has a perennial problem. Working at a university every year she has to assign some 200 students to 20 thesis supervisors. With Excel as her only tool and many matchings, an unthankful task. Time for writing a Machine Learning  program.

Each student is given two choices from twenty supervisors. The totals of all student’s first choices (blue bars) and second choices (orange bars) are shown in the top row figures. The twenty supervisors are indicated by the letters A through T. 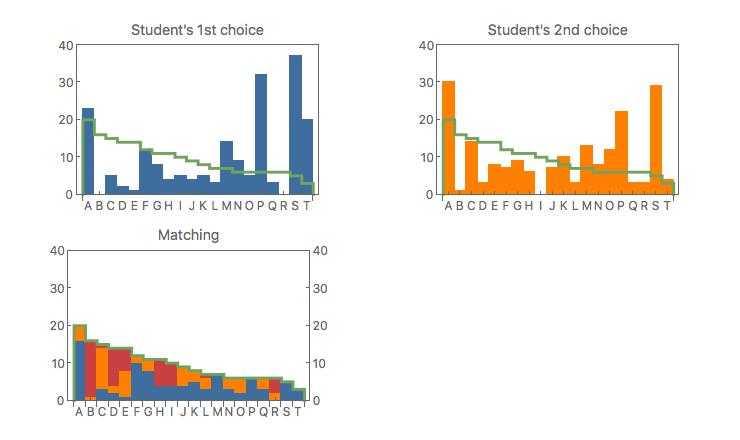 The discrepancy between the green line and the blue or orange counts shows the imbalance between the demand (by the students) and the supply (by the supervisors). How can one make a fair assignment?

A naive attempt is to start at the top of the list of students and assign them to the supervisor of their first choice. After a number of matchings, some supervisors have ran out of openings and the next student’s first choice cannot be honoured anymore. This student is then matched with her/his second choice.

At some point down the list also no second choices can be matched anymore. Then this student is matched with an arbitrary supervisor. This naive type of matching is rather unfair to the students at the bottom of the list. They will almost certainly be poorly matched. Unnecessarily.

The Simulated Annealing  computing method is ideal for this task. This early example of Machine Learning  was invented by Nicholas Metropolis and other scientists in the 1950s. The key idea is to randomize the assignment problem.

Next, randomly, two student-supervisor combinations are taken, the two supervisors are interchanged, and the new student-supervisor  distances are compared with the old ones. When the sum of both distances is smaller the new match is accepted. When the sum of the distances is bigger, the interchange is a deterioration and is usually rejected. One trick of the trade in Machine Learning is that a small fraction of deteriorations is accepted anyway. Contrary to one’s intuition, this improves the overall result in the long run. Thanks to Metropolis et al. 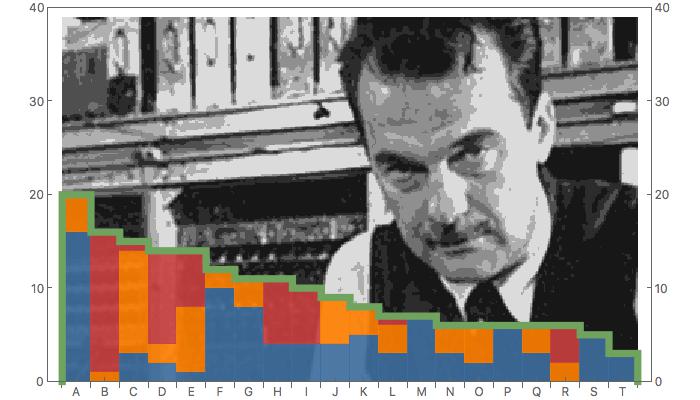 In my wife’s case, this long run is a mere sixty-thousand interchanges. In the first few thousand interchanges improvements are plentiful, but later on they become more rare. When the sum of the distances does not decrease anymore, a “close packing” of student-supervisor combinations has been obtained.

The best matching result is shown at the bottom figure. The supply and demand are matched exactly. For each supervisor the mix of student preferences can be read off. The blue segments are the first choices, the orange segments the second choices, and the red segments are the remaining ones. In total 46% of first choices (total blue area) are accommodated, 28% of the second choices (total orange area), and 26% as remainders (total red area).

By rerunning the program a number of times, we have gained confidence that better solution will be very difficult to find. Student and supervisors have to make due with what we have presented here. Most importantly, every student got the same fair chance of being assigned to her/his supervisor choice.